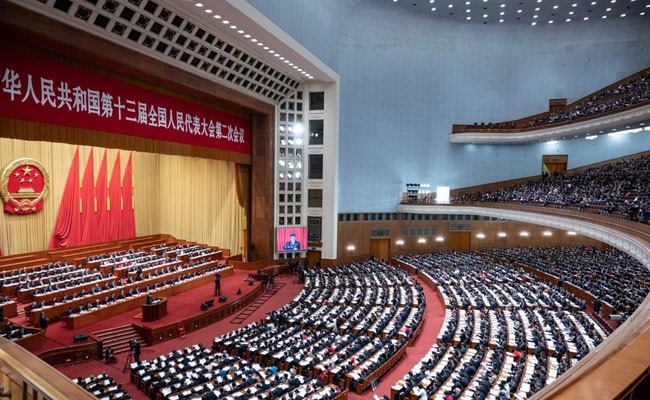 The National People’s Congress (NPC) was originally due to start on March 5. (Representational)

China’s top legislature will hold its annual session next month after postponing the meeting for the first time in decades due to the virus outbreak, official news agency Xinhua said Wednesday.

The Communist Party leadership announced in February that it would put off the annual National People’s Congress (NPC) for the first time since the Cultural Revolution as the country battled the coronavirus outbreak, which has since become a global pandemic.

The rescheduled session on May 22 will be seen as a sign of confidence by the leadership that the country has largely brought its outbreak under control.

Top Communist Party leaders including President Xi Jinping attend each year’s gathering with delegates from across the country, to rubber-stamps bills, budgets and personnel moves already decided by the party.

According to a statement on Xinhua, the decision was adopted by the NPC Standing Committee — a body that oversees the country’s legislature session — which met for four days from Sunday.

The NPC was originally due to start on March 5.

While most of the strict lockdown restrictions imposed on the epicentre of Hubei province have now been lifted, there are still strict quarantine measures on those arriving in the capital city from other parts of China.

It was not immediately clear how that process would affect the gathering of nearly 3,000 delegates.

The NPC’s Standing Committee said at the time the parliament was postponed that the top officials who would normally attend the meeting should prioritise tackling the virus in their home regions.

The gathering is used to portray the government as answerable to the people’s representatives, but its deliberations are pre-determined well in advance and the whole event is tightly choreographed by the Communist Party.

Nevertheless, it generates global interest as a glimpse into China’s political and economic policy priorities for the coming year.

It has been held every year since 1978, and on March 5 specifically for the past two decades.

(Except for the headline, this story has not been edited by NDTV staff and is published from a syndicated feed.)